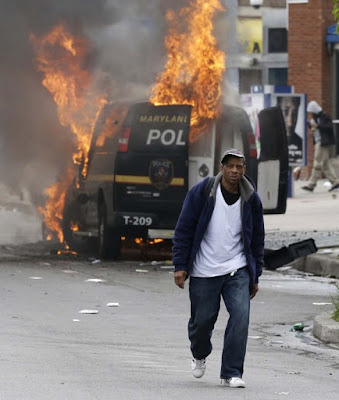 What no one seems to have addressed so far are the large segments of our population who are innately UNGOVERNABLE.  It started in the so-called Inner Cities – and you know what THAT means ––– millions upon millions of ENWORDS.  Zones of horror created by "liberalism."

How could rendering huge segments of the population –– most of them ignorant, unlettered, backward, unsophisticated, deracinated, alienated, and lacking the basic skills one needs to function even minimally in the larger society –– how could rendering these people helpless and hopelessly dependent on government "programs" and government "handouts" help them to develop into useful, productive citizens?

If the Left had deliberately set out to destroy the chances of the American Negro population to advance, they couldn't have done a better, more-efficient job.  WORSE even than that: in the wake of all these bogus, totally ineffective government policies purportedly designed to aid in "the Advancement of Colored People," much of the REST of society has been degraded, devolved, coarsened, cheapened and led astray.  Like it or not THAT is the corrosive process the Left has foisted on us.

The results, as all sane people certainly must realize, has been the debacle we experience and suffer with now.  What the Left calls "progress" is in truth a REVERSION to BRUTE SAVAGERY after a long slow process of artificially-induced societal degeneration. And "they" will call ME a "hater" for saying this. GREAT DAY in the MORNING! To THIS we've come!

MEMBERS of the RULING CLASS

Sights to make you shudder